Research has shown that we like people similar to ourselves. But does this rule of attraction apply to our liking for fictional characters? Analysis of Star Wars character fans suggests so.

Personality scores of Facebook users who had ‘liked’ Star Wars character pages were aggregated. To be included in the analysis, characters must have had at least 20 Facebook fans who completed a personality survey. Personality scores of fans were scaled within each trait, and medians were used to construct fan profiles in the following charts (click image below to access, opens in new tab/window): 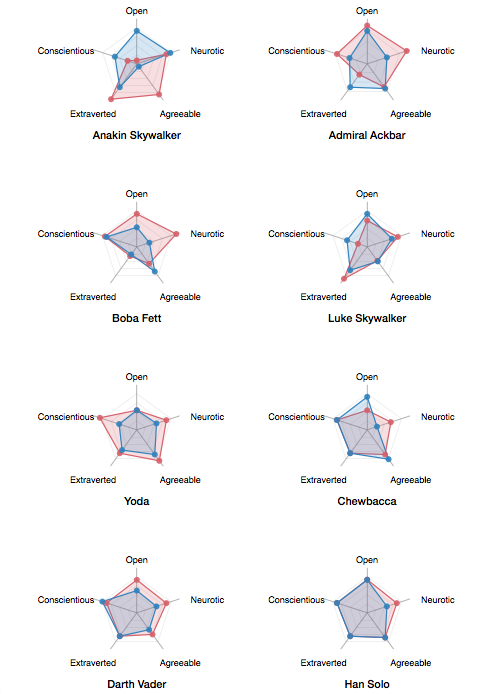 based on data from myPersonality Project, using chart template by nbremer

Personality was measured with 5 traits:

Median personality scores for female fans are represented in red, while that for males are in blue.

Fans seem to like characters who are similar to themselves. Boba Fett, who rarely talked, had fans who were introverted. Anakin Skywalker, considered a useful example to explain borderline personality disorder to medical students, had fans who were neurotic. The effect for Anakin Skywalker is especially striking, because it was as pronounced in males as in females, despite males being known to be less neurotic than females (which stands true for the rest of the character fan profiles).

However, there appears to be an interaction with sex. Male and female fan profiles for Anakin Skywalker are near opposites. Male fans seem to be disagreeable like the character himself. On the other hand, his (lovestruck?) female fans seem to be highly agreeable. To overlook his disagreeable nature and fall for Anakin Skywalker in a romantic way would probably require a congenial disposition.

As much as a controversial personality might beget a polarized male-female fan base, a celebrated character appears to attract a balanced fan base. Han Solo was ranked 14th by the American Film Institute in its list of greatest screen characters, making him the highest-ranked Star Wars character. The personality profile of his fans is characterized by moderate scores on all traits for both males and females, save for the established sex difference of males scoring lower than females on neuroticism.

Contrary to expectations though, Yoda attracted a male fan base scoring low on conscientiousness, despite his indefatigable work ethic of “do or do not, there is no try”. Were fans relieved that Yoda did after all give them an option to “do not“? Furthermore, despite being portrayed as a sage, Yoda attracted fans who scored low on openness, which is a proxy of intelligence. However, this might just be due to his bad grammar.

Algobeans is the brainchild of two data science enthusiasts, Annalyn (University of Cambridge) and Kenneth (Stanford University). We noticed that while data science is increasingly used to improve workplace decisions, many people know little about the field. Hence, we created Algobeans so that everyone and anyone can learn - be it an aspiring student or enterprising business professional. Each tutorial covers the important functions and assumptions of a data science technique, without any math or jargon. We also illustrate these techniques with real-world data and examples.